Insurance Asset Risk’s second issue is now out, with a special focus on sustainability.

While insurance regulators, in Europe at least, are increasingly picking up on the topic of sustainability, there is little consensus among industry stakeholders on what needs to be done, beyond governance and reporting. 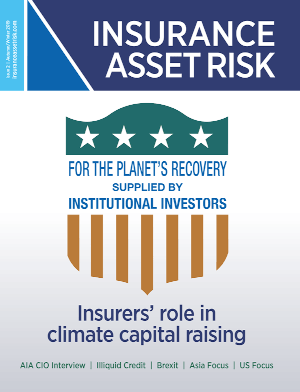 Most interviewed stakeholders are opposed to capital charges based on green or brown factors, arguing Solvency II capital charges are, and should remain, risk based, and not be instruments to achieve the ends of policymakers and politicians.

However, this seems a ‘convenient argument’ rather than a solid case. Indeed, capital charges for infrastructure have evolved over time, and not everyone agrees the changes have been based on risk alone.

Even if they were, the ‘risk-based’ argument is dubious. Capital charge calibrations have suffered from a political bias from the very start of Solvency II. As a simple example, under current rules, EU government bonds have no capital charges, while equity capital charges range from 22% to 49%.

Is it really 22 to 49 times riskier to invest in Coca-Cola - for example - than it is to invest in Italian debt (as another example)?

But Rome, or any other EU government, does not need a drinks maker supported by institutional capital in the way it needs its own public works, social infrastructure and welfare and health systems financed, by lenders with deep pockets.

Insurers were fuelling the public purse with €2.1trn of general account money at the end of 2018 – a support Europe’s governments can ill afford to lose.

So if from their inception Solvency II calibrations have been designed to channel capital towards desired pockets of the economy, or sectors, to sustain growth, why not acknowledge that at the moment capital allocations are not tackling the issue of climate change? Then knowing that global warming has tremendous financial ramification for businesses, the economy and society, why not then use capital charges as one of the useful tools?

What is more, if Solvency II capital charges are instrumentalised to encourage capital towards infrastructure projects, towards private sector funding and towards government debt, then they should be good enough to direct capital towards infrastructure projects, private companies and governments that facilitate the transition to a low carbon economy. If large investors believe better alternatives are elsewhere, they can still stomach a higher charge.

So let’s stop pretending, and instead integrate sustainability into Solvency II’s pillar 1. This shouldn’t be done blindly. It should be done after proper analysis, of course, but it does require a different mind-set, one for which there is little appetite for - at least publicly.

Integrating sustainability into pillar 1 through a risk-based approach is possible, some stakeholders say in our latest issue.

Sustainability and climate considerations can be integrated into capital charge calibrations to reflect a systemic risk for the insurance sector, not for political motivations, they say.

Though Europe is dithering, the healthy discussions are well ahead of latest developments in the US, where insurers seem oblivious to the climate imperative.

Insurance Asset Risk’s second issue explores why no US insurers other than Chubb has moved to divest from fossil fuel. We also speak with MetLife’s first head of sustainability, on the back of Legal & General Investment Management’s divesting from the US insurers over sustainability concerns.

Insurance Asset Risk’s second issue also covers the array of investment challenges and opportunities faced by insurers globally - from Brexit concerns to US markets through to fast-paced regulatory developments in Asia.