Prashant Sharma, head of international fixed income insurance at JP Morgan Asset Management, predicts a slowdown in growth for 2019, but all is not lost for insurers’ assets and a bit of forward thinking and preparation could help the resilience of their investments in the case of a downturn.

If the current economic expansion was a party, we would now be getting late in the night.

The global economy is in the latter stages of the current economic cycle and central banks around the world have begun to dial down extraordinarily accommodative monetary policy. As the global economy transitions away from an environment markets and investors have been so used to for the better part of the last decade, insurers need to recognise a greater risk of downside surprises in 2019.

While global growth was above trend in 2018, peak global growth for this cycle is most likely behind us and we should expect a slowdown in 2019. Growth should also be more homogenous across geographies next year, compared to 2018 where the US led the way.

The late cycle fiscal stimulus in the US lifted growth there to around a 3% annualised rate in 2018 and, as the impact of that boost fades, a slowdown to 2.5% in 2019 is expected. We expect the US Federal Reserve to raise rates by two times in 2019 versus the one rate hike that is currently priced in by the markets.

Europe on the other hand has been caught in the crossfire throughout 2018. A weaker growth environment in the region has certainly surprised and therefore, a close watch over European economic data will be imperative as 2019 gets underway.

While there are a number of one-off factors that could have caused the 2018 slowdown including trade tensions, auto emissions testing, political risk and higher oil prices, for instance, indicators such as the unemployment rate have been static at 8.1% for the last 3 months ending November 2018. The European Central Bank (ECB) will end its quantitative easing (QE) policy this year and is expected to start raising rates in Q4 2019.

One can also not forget Brexit which continues to dominate the headlines. UK growth has lagged peers at around a 1.5% annualised level. Despite this, the labour market remains strong with unemployment at a 40 year low and the squeeze on real incomes has eased throughout 2018. But, investment spending is still subdued given ongoing Brexit uncertainty. In the case of an orderly outcome, we expect the Bank of England (BoE) to raise rates up to twice in 2019 versus the less than one rate hike that is currently priced in by the markets.

In the far East

Finally, all eyes will be on China in 2019. Economic momentum has waned as a result of the escalation of trade tariffs and continued deleveraging of the shadow banking sector. The country’s expected annual growth rate has dropped from 6.5% at the beginning of 2018 to 6.3% as at November 2018.

China is transitioning from an investment to a consumption driven economy and authorities have a number of levers (tax cuts, fiscal measures) they could potentially pull to offset the slowdown in growth. On top of this, while there has been an increase in wages in developed markets, a sustained pick-up in inflation hasn’t happened at this stage in the economic cycle.

Based on our expectations for global central banks, higher bonds yields are expected in the US, UK and Europe over the course of 2019. Given the stronger data and the later stage of the economic cycle, our conviction is highest in the US market, while political risk means we have less visibility and lower conviction in the UK. We still expect lower terminal rates than previous cycles across all major economies.

Looking out beyond the next 12-18 months, there could be a situation whereby the Fed is near or at the end of their rate hiking cycle while the ECB’s base rate may not be above zero. The ECB and the BoE are going to find it difficult raising rates when the US, the largest economy in the world, is potentially entering a recession.

There is historical precedence here and it may be difficult for the ECB to deliver a steady hiking cycle– in the last 20 years there are only three instances of the UK, Europe, Australia and Canada hiking when little or no tightening is priced in the US, all happened in the run up to the financial crisis. This raises some key questions for euro denominated investors – How much can the ECB hike rates? Are we in for a lower for longer interest rate regime? Is Europe going the way of Japan? 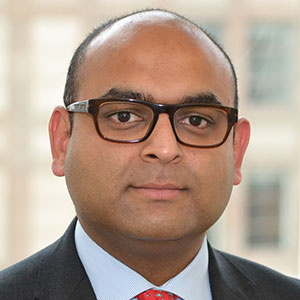 With around 35% of European insurers’ portfolios in corporate credit we are paying very close attention to this market which differs amongst regions.

Operating trends are decent in US investment grade corporate credit with Q3 2018 S&P 500 revenue growth of 8% for instance, but leverage remains near an all-time high and shareholder-friendly activity has continued.

In contrast, European corporate credit fundamentals remain resilient and we are seeing no signs of mid-cycle exuberance.

Technicals, especially in the Euro market, look challenged with the ECB’s QE expected to end by year end. The ECB has purchased an average of €5.5bn / month of non-financial corporate credit since the start of the ECB programme. The market needs to find a buyer to step in to maintain demand.

Insurers who are concerned about a potential downturn, and the number of headwinds the global economy and asset markets continue to face may wish to reflect on some of these considerations which could help with the resiliency of their investments, to name a few: risk management in portfolios, governance and mandate design.

Insurers need to ensure that they have the right amount of risk in their portfolios. Have they stress tested their portfolios to determine the impact on income and capital of both credit downgrades and market value movements? Have they considered tail risk / downside hedging strategies as we approach the latter stages of the credit cycle?

Insurers could assess the spread risk in their portfolios in the context of a strategic asset allocation that incorporates the input of all stakeholders and could think about having dry powder in the case of a sustained widening in sectors of the fixed income market such as investment grade and high yield credit and emerging market debt. It’s also important to assess asset liability matching risk and see if it is appropriate to close any duration mismatch.

There should be close communication between insurers and their asset management teams to make sure all parties are updated on market movements and impact, and can be nimble with the portfolio.

Investment committees should also have the ability to react quickly to changes in the market environment and be able to quickly dial up / dial down risk.

Mandates should be designed with a focus on diversification – the only free lunch in town. Limiting the amount invested in any single issuer and ensuring a diversified mix of names is key and the best protection against event risk.

There should also be a focus on working with teams that have a deep bench of experienced research analysts who can identify and weed out challenging candidates.

In addition, given the accounting treatment and investment strategy for a number of insurance ‘buy and maintain’ portfolios, they have the appetite to withstand mark to market volatility and can take a longer term view with the fundamental opinion as the primary driver of their investments.

Such portfolios could therefore take advantage of any pockets of liquidity or opportunities as they present themselves - widening on a name that we are fundamentally comfortable with will be an opportunity to add that exposure to a portfolio at attractive yields.

Use of stress tests: careful not to address the fire that just happened