COVID-19 was the 'known unknown' that Randy Brown, CIO at SunLife, has been preparing for the best part of the last five years. So, when markets went into turmoil in H1 2020 the only question that remained was one of timing: when to catch the falling knife? Interview by Vincent Huck

A trader's skills are hardly ever top priority in the job specs of an insurer's chief investment officer (CIO). But when Randy Brown joined Canadian-headquartered insurer SunLife in 2016, his first message to the board was tainted by a decade of trading experience.

"I had the view that there was this 'known unknown'. I had this very strong sense of conviction that something was going to happen, knocking markets off axis and creating a price dislocation," he says. "And I wanted to be in a position to step in and be the liquidity provider in that market."

Brown says those are the exact words he used when addressing the board, convincing them of de-risking the portfolio and getting ready for that opportunity.

This conviction was borne out of the belief that "the market plumbing was broken; markets were distorted; and we were late in the cycle".

What he calls the 'market plumbing' is the risk transfer mechanism from seller to buyer. He saw it as skewed because banks had reduced 90% of the risk capacity they were devoting to sales and trading, but the market had doubled.

"The analogy is there is a fire in a theater and all the exits are locked except for one," he explains. "And everyone has to get out through the same door."

At the same time central banks globally had provided "so much liquidity for so long" that pricing was distorted in Brown's view. "Everybody had the same trade off, everybody was long risk, long credit, because you were forced to because of what felt at the time like abnormally low rates."

"So, when people change their mind and said, 'we're late in the credit cycle we think the market is going turn and we want to be a seller not the buyer', it's hard to get that risk transferred orderly, especially if a lot of people have to do at the same time - that's when the price dislocation comes."

And so SunLife spent the best part of the last five years getting ready. This meant de-risking the portfolio, for example reducing exposure in retail assets and going up the real estate quality curve. Most of these moves were done on the margins, because moving a life insurers' balance sheet is like "turning an aircraft carrier into the wind", he says echoing his 2019's supertanker analogy.

But it was also about preparing the board and the management team, "because I was going to be wrong before I would be right".

"It's really hard to catch a falling knife," Brown says adding that his 14 years career as a trader and having a P&L everyday prepared him. In his first week as a trader, he understood that buying the low tick and selling the high tick was never going to happen. If he were that good, he would have set up his own hedge fund, he laughs. 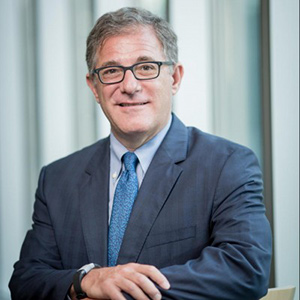 "So, in Q1 of this year we were really ready as an organisation and when the market started to fall apart, we waited, and waited... and waited... and then we stepped in," Brown recalls. "As it turned out – and I'll attribute this to luck – we did it at the bottom in terms of spreads."

Throughout March and April, the Canadian insurer implemented what it had anticipated to do, making a lot of public market purchases and originating many private market loans focusing on the high-quality assets.

"We were a liquidity provider, and we got very well paid to provide that liquidity," he says.

The insurer also bought a majority stake in Crescent Capital Group, a global alternative credit investment manager with $28bn in assets under management, as part of its move into alternatives but also its willingness to expand the third-party asset management business.

The fiscal and monetary responses to the crisis – what Brown dubs as the technical – have overwhelmed the market fundamentals. But ultimately the fundamentals always win, and the market reprices to find a new equilibrium.

The COVID-19 pandemic however has brought some structural changes about, he believes. It has proven the ability of staff to work remotely, Brown argues, but at the same time it has highlighted the fact that most of us want a balance between work and home, and the flexibility to navigate between the two rather than being all the time at the office or all the time at home.

Nevertheless, he does not think that the pandemic has knocked the gloss off some asset classes. Although there is a big debate about real estate and especially the future of offices, he believes all asset classes within real estate still have merit.

"There will always be the need for offices, distribution centers and multifamily rental properties, as well as for retail, maybe not as much retail as we have today, but there's a need for retail," Brown says. "People want to go out, get in their car or walk down the street to pick up something at the store and you can't get your hair cut online!"

One area of emerging opportunity for next year will be green assets, according to Brown. "A Biden presidency will be more environmentally aware and supportive which will create more opportunities."

Environmental, social and governance (ESG) issues are high up on Brown's personal agenda. Although North America is often highlighted as lagging behind its European peers on these issues, two years ago at Insurance Asset Risk's annual North America conference, Brown was one of the few voices in the room to raise the issue.

Since then, SunLife has launched a green bond and the Canadian insurer is working on building an internal ESG rating capability for bonds. As Brown says, there are no strong ESG ratings out there for bonds although there are plenty for equity.

And so, the SunLife aircraft carrier continues to slowly turn into the wind, guided by a CIO happy to have been proven right and continuing to look at those little changes on the margin. "For the core portfolio will keep to our knitting."