Why is climate risk such a threat to insurers?

Russell Büsst: Climate change affects both sides of insurers' balance sheets, likely impacting the liability side of the balance sheet, whilst driving a potential need for increases in capital and reserves.

Up until about two years ago, insurers focused on climate risk almost entirely on the liabilities side of the balance sheet.

Chief investment officers at insurers are now also seeking to address climate risk, and this comes at a time when there is regulatory and shareholder pressure.

The threats are that businesses - whether the companies we invest in or the insurance industry per se - do not respond sufficiently quickly to climate change risk, and what appears to be a relatively small risk on the asset side of the balance sheet becomes a significant risk as markets and commercial pressures develop.

Matt Lightwood: Climate risk also creates modelling risk for insurers. This is a different risk than insurers are typically used to dealing with, as there is no precedent to use as the basis for building models and there are so many possible paths climate change could take. 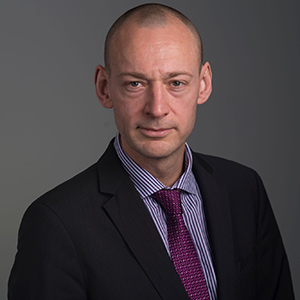 Conning launched a risk reporting service for insurers in 2020. Do you plan to update the tool this year?

Matt Lightwood: We are currently producing climate risk reports for clients, but we are very busy developing the system into a web-based software-as-a-service offering, so that users will be able to more easily get their hands on the scenario analysis tool, called the Conning Climate Risk Analyzer. That will be released in early March.

We are already actively engaged with several mid-sized insurers interested in using the tool, and we expect that to grow exponentially in the next two years.

Later in the year, we are also planning additional climate-related functionality in our software, such as ESG [environmental, social and governance] indices within our economic scenario generator.

For high carbon-emitting sectors, is divestment or engagement the best approach?

Russell Büsst: Divestment is not the answer, but rather it should be about engagement and monitoring. I think it is important to assess companies on an individual basis. We accept there are objectives and targets, and we do the same for our clients.

But at the same time, I think just ditching a company because of a single metric is not necessarily the right thing to do.

I totally understand that a retail-based business may say it does not want any carbon exposure. However, from a long-term perspective, for our client base, it has to be more nuanced than that.

Why does Conning's expertise stand out from its competitors?

Matt Lightwood: We have developed a solution that is truly implementable and can be achieved without requiring swathes of really expensive data to drive it.

When I look at the competition, there is a lot of very expensive consulting type work going on, whereas we have developed a tool that is standardised and pre-packaged. Every mid-sized insurer would have the resources to implement it.