Central banks should stop pandering to market expectations and escape the 'hall of mirrors' that this creates. That's the central theme of Expected Returns 2020-2024, our latest five-year outlook for asset classes, macroeconomic themes and other vital issues for investors.

The outlook warns that a recession within the next five years is almost inevitable, which means the expected returns for the major asset classes have been revised downwards. A core expectation is that government bonds will continue to offer negative returns, with equities generating positive returns, and commodities returning the most.

The annual publication by Robeco Investment Solutions challenges the notion that bond prices reflect a deflationary outlook; it says the real problem is political uncertainty at a time when a recession is long overdue.

"In today's financial markets, we have experienced what was once unthinkable: negative long-term nominal bond yields," says strategist Peter van der Welle. "Irony has it that the archetypical safe haven asset, the sovereign bond market, has set sail for the unknown: a fleet of USD 15 trillion in outstanding bonds has already sailed beyond zero."

"Clearly, the sands of the global economy and the financial system are shifting: globalization as we know it is under threat."

So, what are the policymakers going to do about it? Former US Federal Reserve President Ben Bernanke first warned against blindly trying to meet expectations to avoid unsettling markets in a lecture in 2004. He called this strategy the 'hall of mirrors'.

Fifteen years later, Fed monetary policy seems to be degenerating into this very strategy. "Monetary policy ought to be data dependent and made on the basis of evidence," Van der Welle says. "Instead, central bankers seem increasingly occupied with meeting market expectations for ever-lower interest rates."

"The context for the emergence of this dynamic is understandable as inflation remains anemic, while recession fears are growing; markets see dovish monetary policy as the only solution. A barrage of tweets from a US president trying to bully the Fed towards a monetary easing stance does not help either to stay the course."

"In our view, it is essential for central banks to escape the 'hall of mirrors' strategy. Escape is the right word here, because monetary space needs to be optimized in advance of a recession. Escaping the hall of mirrors is essentially about escaping a liquidity trap: with nominal policy rates close to or at the effective lower bound, our view is that central banks in advanced economies are ill-equipped to counter a recession."

Governments have an important role to play in providing effective fiscal policy, adds portfolio strategist Jaap Hoek. "Unlike central banks, governments can shift crucial macro parameters in the current environment; we expect fiscal policy to step in," he says.

The Expected Returns outlook offers three scenarios for the next five years:

"In summary, a recession in the next five years seems almost inevitable, says Hoek. "Risk taking in a late-cycle environment may be rewarded initially, but asset returns will remain below their long-term historical averages over a five-year horizon."

"We don't think the next recession will be an edge-of-the-world event, like the global financial crisis. It will likely be more of a smörgåsbord recession, with smaller pockets of excess in the global economy snowballing into something substantial enough to stifle global growth."

So, what does this mean for investors? "On a five-year horizon, we have revised downwards our return forecast for most asset classes," says Van der Welle. "For government bonds, the outlook for the next five years is divided. German Bunds are significantly overvalued and as inflation picks up, returns are predicted to remain well below cash. In contrast, US Treasuries will benefit the most when the recession sets in, comfortably beating cash."

"Valuation is also a negative factor for developed market equities. Still, returns can remain relatively strong in the first half of our forecasting period. As we expect a recession, returns will fall below the historical average." 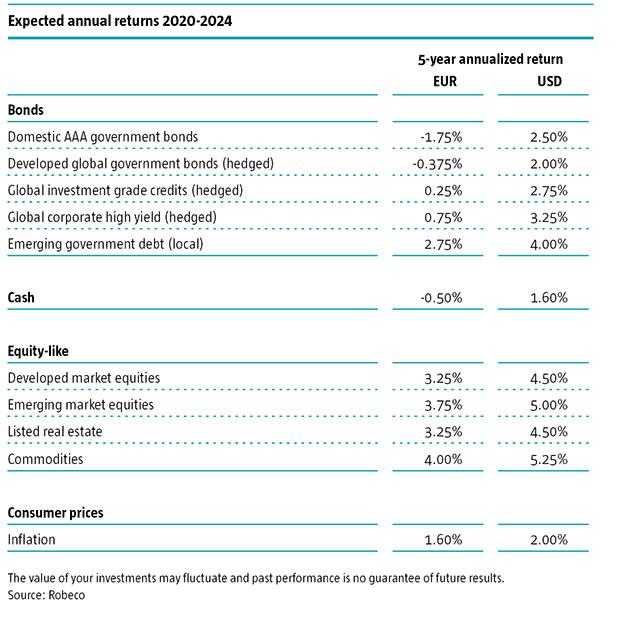 "The macro environment is also becoming less supportive for investment grade credit and high yield, and we expect excess returns to be below historical average levels."

Four special topics accompany this year's Expected Returns – the first two aligned with the 'hall of mirrors' theme. 'Celebrating 30 years of inflation targeting?' asks whether this tactic by central banks has now run its course, with some suggested alternatives. 'Paving the way for unconventional policy' argues that monetary policy space to fight the next recession has dwindled – but it is not the only game in town.

On a different note, 'Giving China its rightful share in your portfolio' explores the puzzle why China's market weight in investment indices is so low compared to its economic weight. What should investors do? Finally, how can one effectively combine all views in a portfolio? In 'Refining the inclusion of views in portfolio construction', we develop a framework that helps investors to translate views such as the ones presented in this report.