Fixed income assets comprise the majority of insurers' investment portfolios, but within the asset class there are a multitude of options. In part one of this Insurance Asset Risk/Royal London Asset Management roundtable, investment and risk managers discuss how they are approaching fixed income, given the challenges of a low-yield environment and the constraints of Solvency II

Chris Cundy: The weather outside today is grim; does that also describe your views on the markets at the moment?

Craig Inches: Pre-Brexit, things were picking up. The economy was growing and we were starting to see some upwards wage pressures. We felt that towards the end of this year we would have seen the Bank of England consider a rate rise in Q4. Post-Brexit, our economist has changed his view somewhat. Not in the sense that we were going to dive into the abyss, but in terms of how uncertainty from the business and investment side would actually weigh on the UK economy.

Neil Parry: A big worry in the US is corporate earnings and capex [capital expenditure], which is painting a pretty bad picture. We have had something like seven quarters of negative corporate earnings, and capex to all intents and purposes is not there.

Lucy Davies: Brexit has the potential to create movement within the market. Although it may not be felt immediately, there is a possibility for a ripple effect down the road. Any major political election, like the one in the US, Germany and France has the ability to shake things up. Politics, like the markets, are not always predictable.

[Central bank asset purchasing] has not changed the strategy, but it certainly has the effect of lowering turnover and reducing opportunities

Chris Cundy: Given that outlook, how are you positioning yourself as a result? Are you fairly neutral at the moment?

Neil Parry: We are happy to be fairly neutral. I am not that worried about a rise in interest rates. We are keeping fairly close to our benchmarks. 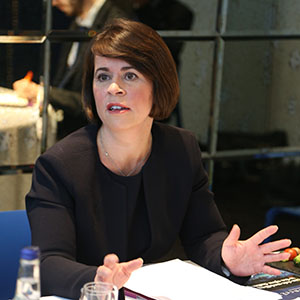 To a large extent our strategic benchmark is driven by our liability matching needs, and so we don't devote a huge amount of time to taking short-term tactical positions. For example: our gilt position has been underweight for a considerable time now, and as rates have come down that has cost us in terms of returns. On the other hand, while our entry points into UK property and US high yield turned out to have been very well timed, the decision to invest had been taken on strategic grounds. We seek to optimise the overall investment portfolio from the point of view of utilising risk rather than trying to call the market.

Lucy Davies: That is a very similar approach to what we take. Obviously it is a closed business, therefore asset-liability matching is key.

Lucy Davies: It has not really affected strategy, but with such a big buyer in the market, it does lessen opportunities for us.

Atanas Christev: We are in exactly the same situation. It has not changed the strategy but it certainly has the effect of lowering turnover and reducing opportunities.

Moving up the risk spectrum

Chris Cundy: Within fixed-income, what can you do to survive the squeeze on returns? Is it just a case of moving up the risk spectrum a bit?

Neil Parry: You can do that but there is no free magic return; you can go along the duration or you can go further up the credit curve. You might get paid a bit more but you take more risk.

Craig Inches: Sometimes there is not a lot of benefit to extending duration. Our all-maturity gilt fund probably gives you a yield of 60 to 70 basis points [above risk-free rates], but we have a cash fund which gives you 80, so you are actually getting a higher yield on our cash fund, which has an average maturity of a year versus something that has a 12-year duration.

Sometimes there is not a lot of benefit to extending duration. Our gilt fund gives you 60-70bps, but we have a cash fund which gives you 80bps

Atanas Christev: About two or three years ago, when we inherited a much lower-risk portfolio from RBS, we could do that. But we have come to a stage where we are utilising the risk (or capital) much more fully and efficiently, so we cannot keep adding risk or new asset classes with impunity. We are driven by what the capital position is, so any changes we make will be small. Currently, we are exploring opportunities such as increasing our US high-yield allocation slightly, or replacing some of our AAA-rated government and development bank debt with muni bonds.

Azhar Hussain: Uncertain economic growth and low interest rates have highlighted income-generating assets as an attractive proposition. We also see that regulation like Solvency II is putting pressure on the nature of assets insurers can invest in. Combining these factors, we believe there is a real demand for a certain type of income solution.

In 2013, we launched two short-duration strategies; both strategies are global by design, investing predominantly in sub-investment grade debt issued by companies domiciled in the UK, Europe, Asia and the United States. The evidence has been very positive and we have seen both funds strongly outperform their benchmarks.

Chris Cundy: Are there opportunities in overseas markets?

We have invested overseas, but if your liabilities are in sterling then you have an FX issue, so you have to be able to get the yield.

Neil Parry: We have made small allocations across various 'volatile' elements of the fixed income market, and one of those is high yield. We are denominated mostly in US dollars, so we have a portfolio which is US dollar. Having those asset classes this year has been very profitable.

Azhar Hussain: We aim to construct diversified portfolios that will deliver consistent alpha from multiple sources. So we look at overseas markets as a key part of the portfolio construction, but not in isolation.

We believe taking a global view is a very key part in managing risk. In constructing our global high-yield portfolio, we include this as a key part of our risk management process. We have set ranges around country, sector and security exposures.

For our insurance clients in particular, we recognise the inefficiency of unhedged currency risk under Solvency II and therefore any currency exposure associated with holdings of bonds is hedged through the use of forward currency transactions.

Chris Cundy: Have Solvency II capital charges ruled out any asset classes for you?

Lucy Davies: The capital insurance companies are required to put aside for securitisations is quite high and when combined with the criteria that must be satisfied in relation to securitised investments, this asset class is not particularly attractive under Solvency II. In addition, there is a lot of uncertainty about what is classified as a securitised bond under Solvency II.

Neil Parry: Also, if you outsource your securitised portfolio, the responsibility to know what is in the portfolio remains yours. Many market participants have said maybe they will clarify the rules in a couple of years and maybe there will be more guidance. It is an asset class we like, but we will probably steer clear until there is more clarity about the regulations.

[Securitised credit] is an asset class we like, but we will probably steer clear until there is more clarity about the regulations

Atanas Christev: In the past few months we have decided to exit securitisation for those same reasons. It was not a large percentage of the overall portfolio, but it is a pity because it provided diversification.

Craig Inches: We have two short-dated investment-grade credit funds and one is akin to the investment philosophy of Royal London, which is largely to move into that securitised non-rated asset space. We found that for the insurance market, it just did not tick the boxes.

We then launched an investment-grade fund that only invested in core credit, standard type-one and not type-two securitisations, but the yield give-up is about 100 basis points on a very short-dated investment product, so it begs the question 'is it worth it'?

Chris Cundy: Has there been any change in the way you measure investment risk?

It is nice to have time-to-recover and metrics like that, but it always comes back to VaR [value at risk]. It is the standard, and is required for Solvency II: if an executive committee or a board want to see a risk number, then it is probably a VaR. Maybe it is not perfect, but it is what everyone uses and it is the best way to compare, until we have something better.

Atanas Christev: The higher up you go in decision level, the more you need a measure capable of aggregating different types of risk.

Lucy Davies: We use a credit earnings-at-risk model, which is linked to earnings and how much of your earnings you are prepared to put at risk for credit.

In part two, published next week, the participants discuss liquidity, diversification and outsourcing.

The views expressed in this article are those of the individual, rather than necessarily of the firm.

a.s.r. commits to 65% reduction in CO₂ footprint of the investment portfolio

'Come to me with solutions'

Real demand - the rise and rise of infrastructure